At several sites in Central Oregon, USFS and ODOT have been logging trees near roadways, citing public safety as the justification. Most of the risk is due to dead trees killed by these agencies when they used an herbicide called Perspective to spray in hopes of managing broad leaf plants along roadsides at several sites. As a result of their failure to heed the warnings on the label of this chemical, hundreds of ponderosa pine trees have died along scenic corridors, and the Forest Service’s response is to log and sell the trees to the highest bidder.

The first site to gain attention for this mishap was Highway 20, where thousands of large and old growth ponderosas that greet drivers entering the Sisters area began showing signs they were failing to thrive in 2014. It was quickly realized this was from three consecutive years of spraying the weed-killer. The Forest Service stated in an interview with the Bend Bulletin on May 3, 2018 that the product’s label did not list ponderosas as vulnerable to damage by the product. This is directly contradicted by their own 2012 literature regarding the use of products containing aminocyclopyrachlor, the active ingredient in Perspective, as well as the EPA label for the product in years before and during it’s usage.

Now the Forest Service is planning on commercially logging these dead trees along Highway 20, trees that had been previously saved from logging by the public in regards to a road widening proposal. We at Blue Mountains Biodiversity Project have proposed that a more appropriate use of the trees would be to utilize them as habitat-enriching logs throughout the public lands of the Deschutes region, where generations of over-logging have reduced this essential bio-mass in our forests. 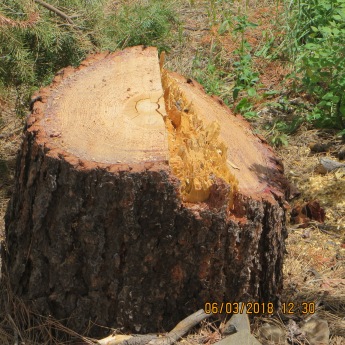 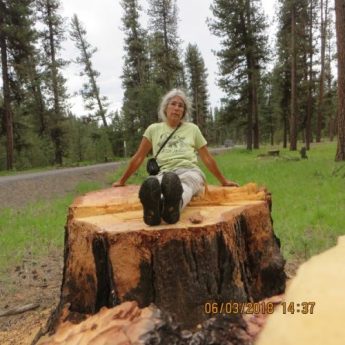 After this incident near Sisters, an Oregon Department of Agriculture investigation revealed other sites where this egregious negligence occurred. The public agencies also killed pine trees along two roads in Sunriver, as well as another site north of La Pine. A spokesperson for ODA stated that there is history of this active ingredient killing conifers in other parts of the country as well.

Old growth ponderosas have also been logged by ODOT at Ochoco Summit along Highway 26. These were deemed “hazard trees,” but when BMBP co-director Karen Coulter visited the sale, she observed old growth stumps with sap seeping out, indicating the trees were living when they were cut. She also noted that almost none of the trees had any deformities whatsoever. When contacted about what made these trees a hazard the forest service stated that there are guidelines for choosing hazard trees, and the hundreds of trees along the roadside at this site (about 13 miles of scenic corridor) were all deemed hazardous by ODOT guidelines. They also stated that the trees were sold and the purchaser will remove all the wood, leaving none left for habitat or forest well-being. 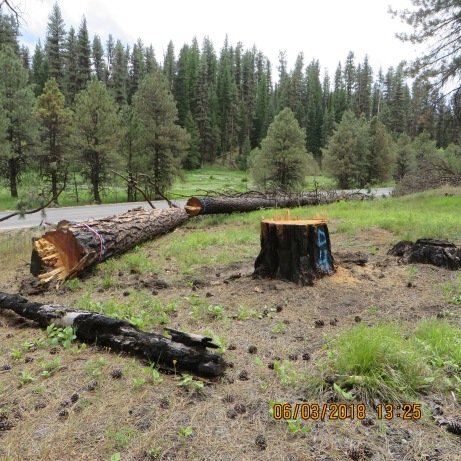 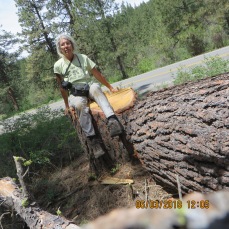 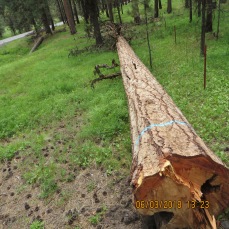 Fallen ponderosa pine waiting for purchaser to come claim it 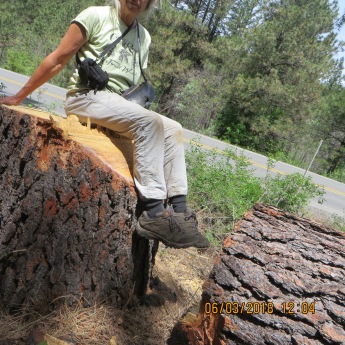 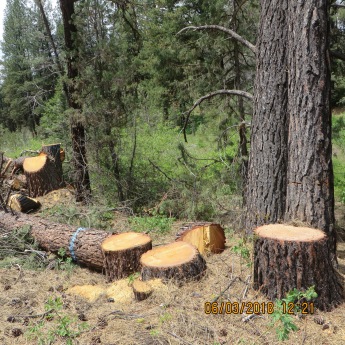 Stumps and logs. None of the logs will be left as biomass to enrich the forest

We at BMBP ask that anyone concerned with the spraying of herbicides on our public lands and the commerical logging of our scenic corridors let the following district offices know. Here are some of our main concerns:

– We oppose irresponsible, widespread use of toxic herbicides and support the use of alternatives where possible.

-We do not support turning these incidents (where logging is necessary to protect public safety) into commercial timber sales. Leaving the downed wood in the forest increases essential bio-mass and habitat. This would also reassure the public that public safety is the true impetus for cutting the trees.

-We support stronger public oversight and review of these types of projects, especially the logging and selling of hundreds to thousands of roadside trees deemed hazardous by ODOT. Why was the sale of the trees on Highway 20 made public for comment, but not on Highway 26?

-We are concerned about the cutting of growth, as it changes the historic character of these public lands 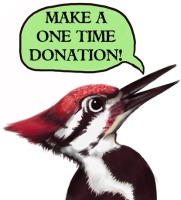 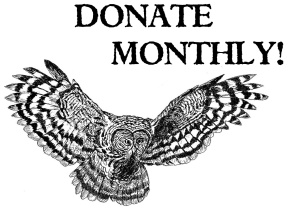