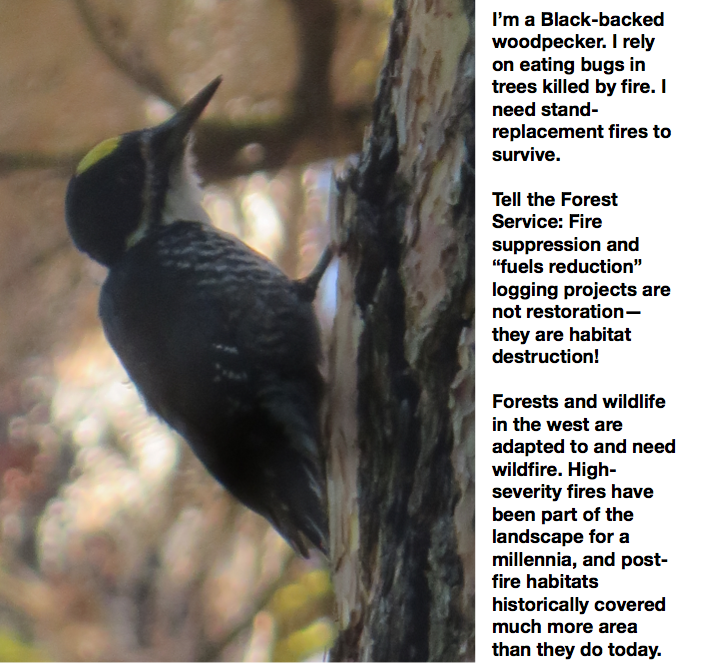 POST-FIRE LOGGING IS BAD FOR FORESTS

The wealth of scientific studies done on post-fire logging have come to an overwhelming consensus that post-fire logging has extremely negative impacts on numerous species, sensitive ecosystems, snags and downed wood (both very important for wildlife habitats), water quality, and forest regeneration. Richard Hutto, in his study Towards Meaningful Snag-Management Guidelines for Postfire Salvage Logging in North American Conifer Forests (2006) goes so far as to state: “I am hard pressed to find any other example in wildlife biology where the effect of a particular land-use activity is as close to 100% negative as the typical postfire salvage-logging operation tends to be.”

In an Open Letter to Members of Congress from 250 Scientists Concerned about Post-fire Logging (2013), scientists state that “Post-fire habitats created by fire, including patches of severe fire, are ecological treasures rather than ecological catastrophes, and that post-fire logging does far more harm than good to the nation’s public lands.”

Burned areas are best left to their own natural recovery processes. Several studies also showed that post-fire logging decreases the abundance and diversity of native plant recruitment. Post-fire logging and post-fire replanting can negatively impact forests’ ability to regenerate, which can facilitate non-native species establishment and spread by creating spatial and ecological openings (Donato et al. 2006, Lindenmayer & Noss 2006, Titus et al. 2007). Titus et al. (2007) looked at vegetation in salvage-logged and replanted plots vs. vegetation in non-salvaged logged and unplanted plots in the blast zone of the Mount St. Helens eruption. They found that salvaged logged and replanted areas had lower herb and shrub diversity and richness, and more bare areas and moss than un-salvaged areas. Post-fire logging can also exhaust the natural replacement seed banks if plants begin to germinate following fire but then are destroyed by logging activity (Donato et al. 2006, Lindenmayer & Noss 2006). This is particularly true in areas where the remaining slash is burned (Keeley 2006), or when regeneration burns are used to promote the germination of particular varieties of commercial tree species (Lindenmayer & Noss 2006).

The current science points to post-fire replanting hindering natural recovery as well as potentially setting forests on an unnatural trajectory, and asserts that there are no ecological benefits to salvage logging.

The August 2017 “Science Findings” from the PNW Research Station note that mixed-severity fire, including high-severity fire is necessary for many species:

“Based on their results, Lorenz and her colleagues see the critical role that mixed-severity fires play in providing enough snags for cavity-dependent species. Low-severity prescribed fires often do not kill trees and create snags for the birds. “I think humans find low-severity fires a more palatable idea. Unfortunately or fortunately, these birds are all attracted to high-severity burns,” Lorenz says. “The devastating fires that we sometimes have in the West almost always attract these species of birds in relatively large numbers.” Many studies have shown that a severely burned forest is a natural part of western forest ecosystems. Snags from these fires attract insects that love to burrow beneath charcoal bark. And where there are insects, there are birds that love eating these insects. Lorenz and her colleagues stress that providing snags that woodpeckers can excavate is crucial for forest ecosystem health in the Pacific Northwest, where more than 50 wildlife species use woodpecker-excavated cavities for nesting or roosting.”

“Currently, the best solution we can recommend is to provide large numbers of snags for the birds, which can be difficult without fire,” According to the researchers’ calculations, if one of every 20 snags (approximately 4 percent) has suitable wood, and there are five to seven species of woodpeckers nesting in a given patch, approximately 100 snags may be needed each year for nesting sites alone. This does not account for other nuances, like the fact that most species are territorial and will not tolerate close neighbors while nesting, or the fact that species like the black-backed woodpecker need more foraging options. Overall, more snags are needed than other studies have previously recommended.”

The alteration of unique and crucial post-fire habitat may result in the degradation of destruction of characteristics necessary for species that depend on post-fire habitat. The repeated and widespread loss of this type of habitat may have a negative effect on population trends and habitats for a number of listed, sensitive, at-risk species, MIS, or other special status species. This may include species such as: Townsend’s big-eared bats and other bat species; Peregrine falcon; wolverine; Canada lynx; Pacific fisher; American marten; Bald eagle; Lewis’s woodpecker; Black-backed woodpecker; Three-toed woodpecker; special-status owls; Neotropical songbirds; Bull trout; Redband trout, steelhead, Chinook salmon; Columbia spotted frogs. For example, Black-backed woodpeckers are negatively affected through cumulative impacts from post-fire logging. They may also be negatively affected by the alteration of tree species composition and future quality of habitat from replanting. Black-backed woodpeckers rely on dense snag habitats that have been recently burned and on the Bark beetles that move in afterwards. In addition, species such as Pacific fishers that rely on complex mature forests have also evolved in the presence of fire-created habitats and have been found to utilize them extensively.

There is no scientific evidence to justify salvage logging on an ecological basis, and projects on public lands should focus on truly restorative activities, such as road removal. Numerous scientific studies point to a suite of possible long-term problems caused by post-fire logging, including erosion, increased sedimentation, soil compaction, and negative impacts to wildlife and hydrology. Post-fire logging can also increase future fire risk. Donato et al. (2006) found that post-fire logging actually increases the risk of future high intensity fires, particularly when slash is left on the ground. Thompson & Spies (2010) found that areas that had previously experienced burning and “salvage” logging after the 1987 Silver Fire in southwestern Oregon had more extensive crown damage during the 2002 Biscuit fire than areas that had not been “salvage” logged after the Silver Fire. Post-fire logging can also negatively affect forests’ ability to regenerate, which can facilitate non-native plant species’ establishment and spread. Post-fire logging can also exacerbate or create problems with invasive species through other mechanisms, such as logging equipment spreading invasive plant seeds.

The Forest Service needs to do away with post-fire (“salvage”) logging on all National Forests. Post-fire logging is an outdated, ecologically destructive practice that harms important and delicate habitats.

Post-fire areas are too ecologically valuable to sacrifice for marginal economic benefit to a few individuals and corporations while the public pays for the costs of ecological degradation. Post-fire logging needs to be eliminated on public lands.

In an unexpected development, the US Forest Service announced on March 14th, 2019 that they have withdrawn the Blue Mountains Forest Plan Revision. The objections by Blue Mountains Biodiversity Project and other environmental protection organizations were essentially upheld by the USFS’s withdrawal of their Forest Plan Revision decision. Click on the “Recent News and Major Updates” tab above to read more.

Thank you to everyone who came out to our Annual Benefit! Thanks also to folks who couldn’t be at our benefit but donated online.  We are thrilled to be off to a good start for the upcoming field season.

It was great to see everyone who came out for our 2019 Annual Benefit. The evening was lovely, with  great music by Erik Overson and DJ Sasha Coulter. Thank you to all the performers, and to everyone who donated to the raffle. Thanks also to everyone who helped with the benefit staffing and organization. We couldn’t have done it without you!

We hope to see you all next year!